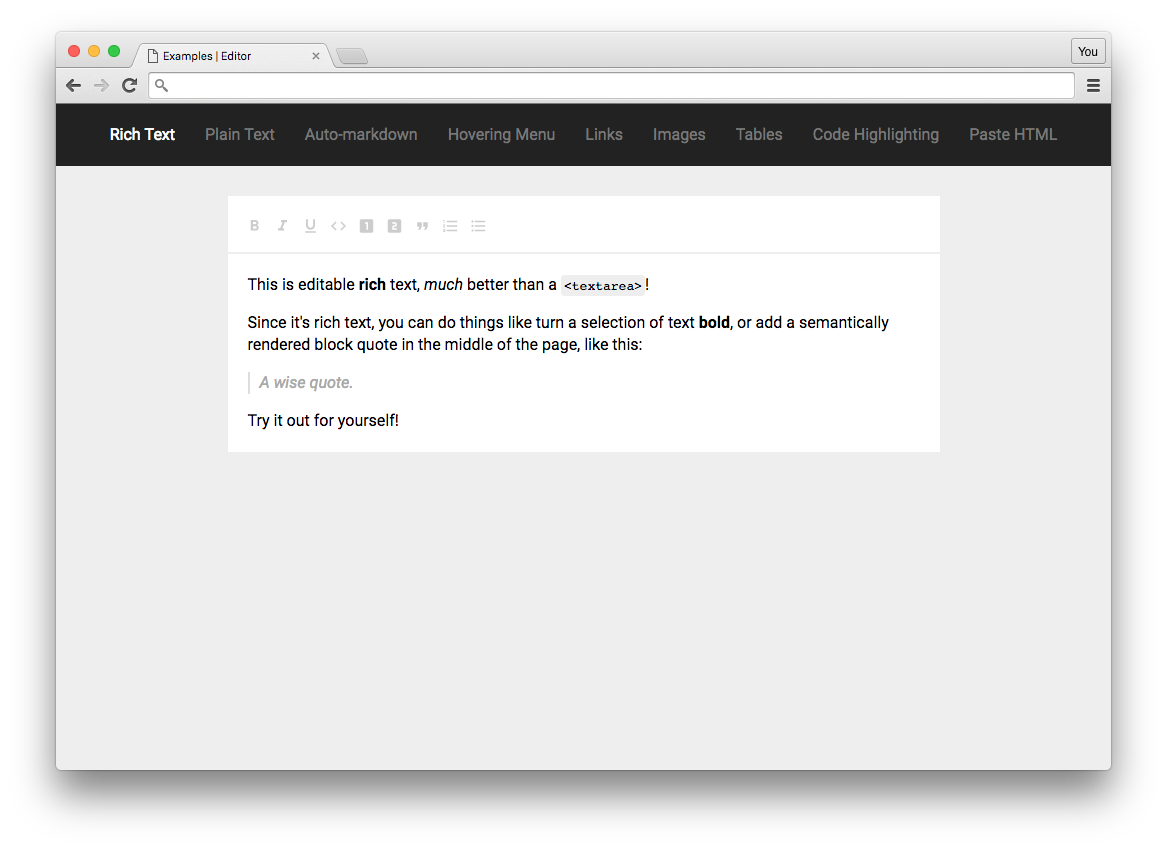 Slate lets you build rich, intuitive editors like those in Medium, Dropbox Paper or Canvas—which are becoming table stakes for applications on the web—without your codebase getting mired in complexity.

It can do this because all of its logic is implemented with a series of plugins, so you aren't ever constrained by what is or isn't in "core". You can think of it like a pluggable implementation of contenteditable built on top of React and Immutable. It was inspired by libraries like Draft.js, Prosemirror and Quill.

Slate is currently in beta. It's useable now, but you might need to pull request a fix or two for advanced use cases.

Why create Slate? Well... (Beware: this section has a few of my opinions!)

Before creating Slate, I tried a lot of the other rich text libraries out there. What I found was that while getting simple examples to work might be possible, once you start trying to build something like Medium, Dropbox Paper or Canvas, you have to resort to very hacky things to get the user experience you want. And some experiences are just impossible. On the way, your codebase becomes harder and harder to maintain.

Here's how Slate compares to some of the existing editors out there:

Of course those are my own opinions, and if those libraries solve your needs, use them! But if you've tried using any of those libraries you might have run into similar problems. If so, you might like Slate. Which brings me to how Slate solves all of that...

Slate tries to solve the question of "Why?" with a few principles:

Check out the live demo of all of the examples!

To get a sense for how you might use Slate, check out a few of the examples:

If you have an idea for an example that shows a common use case, pull request it!

Slate encourages you to write small, reusable modules. Check out the public ones you can use in your project!

If you're using Slate for the first time, check out the Getting Started walkthroughs to familiarize yourself with Slate's architecture and mental models. Once you've gotten familiar with those, you'll probably want to check out the full API Reference.

If even that's not enough, you can always read the source itself, which is explained along with a handful of readme's and is heavily commented.

All contributions are super welcome! Check out the Contributing instructions for more info!