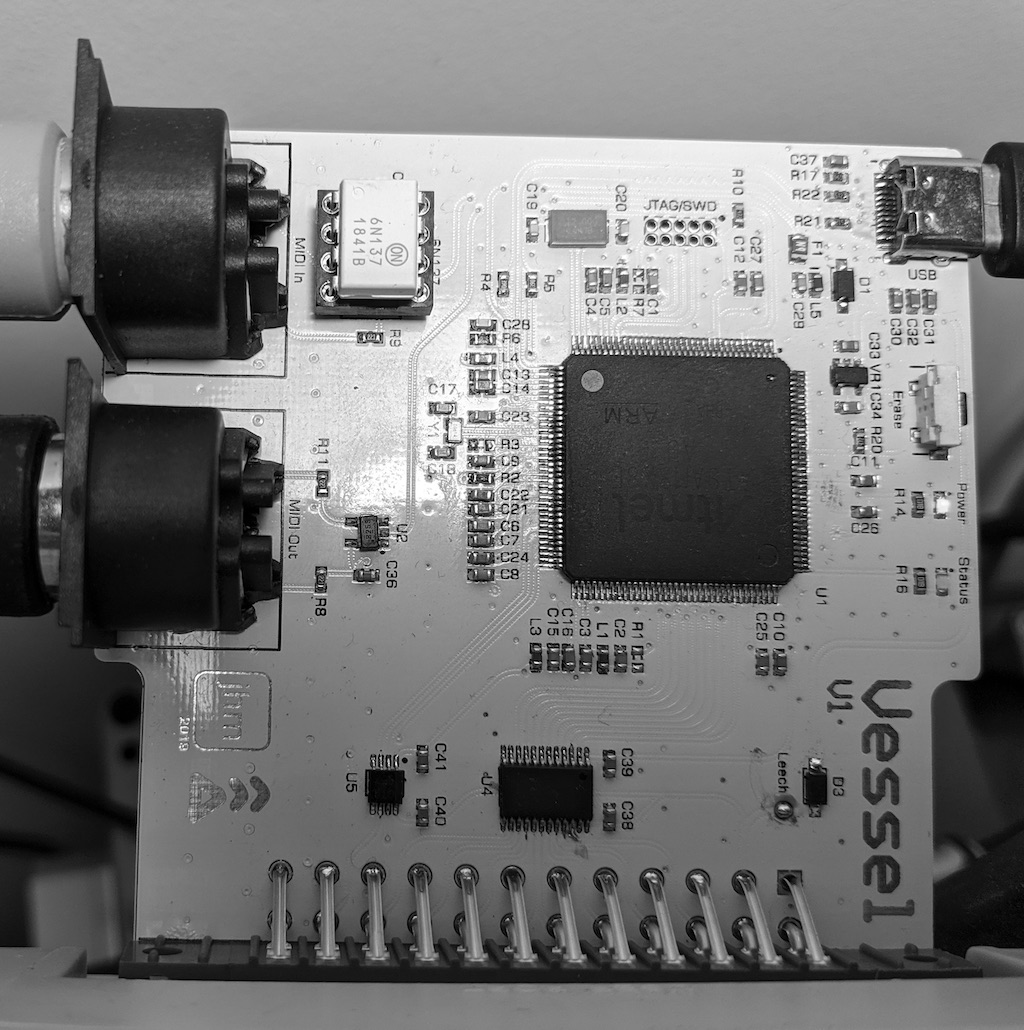 Vessel is a high performance MIDI interface for the C64 based on an Arduino Due-like platform, optimized to reduce interrupt load on the C64. Vessel is only compatible with software written specially for it as it has its own protocol (see below). There is a reference application, Vessel MIDI Player.

Vessel's main points of differences from other C64 MIDI interfaces are:

The Vessel interface provides a buffered, 31250bps MIDI I/O implementation via the C64's user port, without requiring the C64 to handle an interupt (though the C64 can choose to receive one - see below).

The C64 provides a shift-register based TTL compatible serial port, implemented on a CIA 6526/8520, via the user port. This is inconvenient and slow as software must work with one bit at a time.

Fortunately the user port also provides an (unbuffered) TTL 8 bit I/O interface to the same CIA chip. The CIA can both generate a signal for external hardware that the C64 has written a value to that port, and allows the external hardware to trigger an NMI (Vessel uses this to tell the C64 there is at least one byte read to read).

The Vessel interface uses this 8 bit I/O port (PB0-7), /PC2, PA2, and /FLAG. The C64 always controls the direction - whether it wants to read from Vessel or write. Vessel will buffer incoming MIDI data until the C64 wants to read the buffer, and will also write out from the buffer any data that the C64 has written. The C64 can read and write to Vessel faster than MIDI's datarate, so the C64 must not exceed MIDI bandwidth.

When PA2 is high, the C64 wishes to transmit. /PC2 will go low for one C64 cycle, after the C64 has written a byte. We catch the rising edge of that low pulse and read PB0-7, and buffer the byte to be transmitted over the MIDI port.

When PA2 is low, the C64 wishes to receive. Vessel writes the number of bytes it will transmit to the C64 (queued until now from the MIDI port) to PB0-7. Then for each /PC2 low pulse (signifying the C64 has read the port), we will send another byte (if we have any buffered, from the MIDI port).

The C64 has no way to know that Vessel has successfully read or written a byte, we simply have to keep up with its schedule. An Arduino Uno isn't fast enough, but a Due is (with time for other tasks while PA2 changes state input/output).

Following is example C64 assembly language for communicating with Vessel. By default, Vessel will not generate any interrupts, and will not pass through any received MIDI data to the C64, though it always passes through MIDI data from the C64 no matter what.

Vessel needs to be configured (see C64 to Vessel commands) to pass received MIDI data to the C64. Also, NMIs need to be explicitly enabled if they are desired. Configuration is done by sending commands in output mode.

Following is an typical example to enable reception of all real time messages, and note on and note off messages on channel 10, and enable NMIs.

The C64 can send Vessel a command, by sending byte 0xFD (not used by MIDI), and then a command, and then a fixed number of data bytes (depending on the command - unless otherwise specified, a command is followed by 0 data bytes).

The Arduino IDE can be used to reflash Vessel via the onboard USB-C port. You should select the right port in the Tools menu before uploading.

NOTE: you will need to add the following to to WInterrupts.c:

On Linux this can be located with the following command.

If you will upgrade the IDE you will have to change this file again.

Vesselmon is a small C64 test program for Vessel, which allows sending and receiving (including with a loopback MIDI cable).